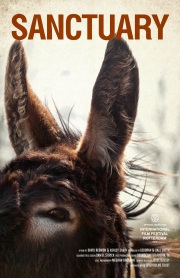 “Welcome to heaven on earth” is one of few spoken lines in filmmaking duo David Redmon and Ashley Sabin’s latest documentary which puts donkey “actors” centerstage. The camerawork is simple and quietly observant, and the sound design is continuously immersive. No interviews or dialogue interrupt this unobtrusive approach. No explanations by title are given. The result is a meditative, hypnotic cinematic flow of donkey behavior much of which remains indecipherable. Sanctuary deliberately recalls Robert Bresson’s 1966 testimonial to a stoic donkey, Au hasard Balthazar. It is also inspired by David Abram’s 2011 book Becoming Animal, which argues that we have lost our ability to apprehend the sensuous natural world amidst our on-screen news obsessed virtual frenzy.

Watching Sanctuary alters us as we watch, as we leave the realm of our own species, and enter a quasi-mysterious world of rustling straw, munching jaws, the industrial clanking of metal doors, the thud of multiple hooves on turf, antennae-like ears flickering back and forth at the communal feeding manger, and many a snorting exhale of donkey breath. Gazing back at the camera with timid blinks, showing wide-eyed apprehension, pacing nervously in their stalls, calling out to other donkeys with what sounds like yearning, these animals foster empathy in us as we witness their rehabilitation. Perhaps "heaven on earth" is indeed a place without judgment or cruelty, in which simple needs are provided, with understanding and tolerance? Entering into dialogue with Bresson's intimation that we are all Balthazars, Redmon and Sabin, like him, promote the possibility of empathy and a vision of the consolation of sharing even non-human experience, instead of enduring the loneliness of it alone.

Obviously these other beings do not speak with a human tongue, they do not speak in words. They might speak in song, like many birds, or in rhythm, like the crickets, and the ocean waves. They may speak a language of movements and gestures, or articulate themselves in shifting shadows…Step into their shade. Listen close. David Abram, "Becoming Animal"

The Donkey projects have been supported by the Leverhulme Trust

This item must be purchased on [streamhost]

You will need to purchase the stream on [streamhost]. Click the link below to continue to the site.